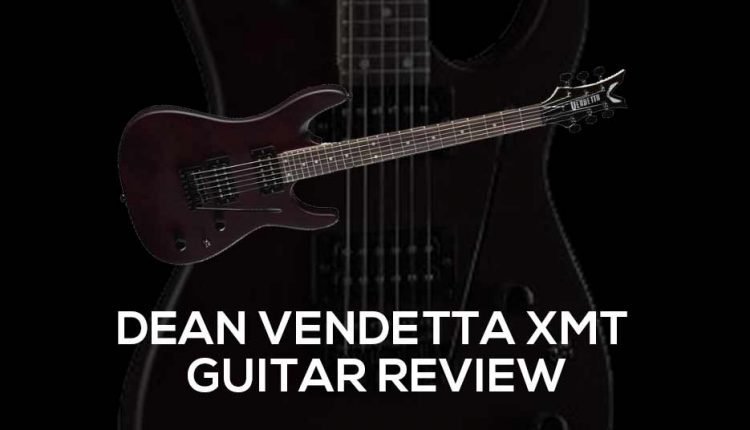 The Dean Vendetta XMT is a guitar that aims to offer up all the benefits of more expensive, feature-filled guitars for a much affordable price point. At a glance, you’d assume it was probably worth much more than its roughly going rate. Operating within a range that is usually exclusive to starter instruments that skimp on the specs at every turn, it’s rather impressive what the team over at Dean Guitars have managed to accomplish.

Seriously, the XMT includes plenty of features and specs that easily tick all of the boxes of many people’s “dream guitar” checklist. This is a full-scale instrument, coming in at 25 and a half inches. The fretboard is made of rosewood, and the neck itself is a nice maple. There are also 24 frets, a far cry from the 21 you usually find on guitars with this kind of price range. The dot inlays aren’t as fancy as many would like perhaps, but they are perfectly utilitarian and will do their job of helping players always know their way around the neck perfectly.

Dean manufactured dual humbuckers feature proudly on the body of the guitar, giving you the ability to crank out crushing heavy tones that will serve you well no matter how hard you hope to rock out. Notes will sustain a bit longer, your distortion will be a bit crunchier, and your signal will have far less noise than with lower end single coils. The electronics are rounded out with a volume knob, tone knob, and three-way selector switch to help you dial in your preferred tone a bit more carefully.

That alone would more than make for a great value at this price point, but there’s still a bit more. The bridge has a built-in tremolo system, allowing for dive bombs and the intense acrobatic vibrato that only bar work can accomplish. Finally, the three by three tuning machines are made of sturdy die cast, giving enough resistance to keep them in tune even after the most aggressive of playing sessions.

If there’s anything missing that would likely be in place if the guitar were more in the $500 range and up, the pickups and bridge would probably be from fancier big name brands, and you could lock the tuners. The neck would also possibly be set rather than bolt on, and the body’s wood would likely be something like mahogany rather than Paulownia. You might also have an additional volume or tone knob and a five-way selector switch instead of five, but those kind of features aren’t exactly essential. When you’re dealing with a mere $100 barrier of entry, the things this guitar can do are vastly impressive.

This isn’t the best guitar in the world, but it easily competes with any other in its price range. There are many instruments that are five or six times this price that isn’t nearly as decked out. This is a fantastic model for anyone that’s on a budget and can’t stand the thought of accepting a lesser built model or a lack of key features because of it.