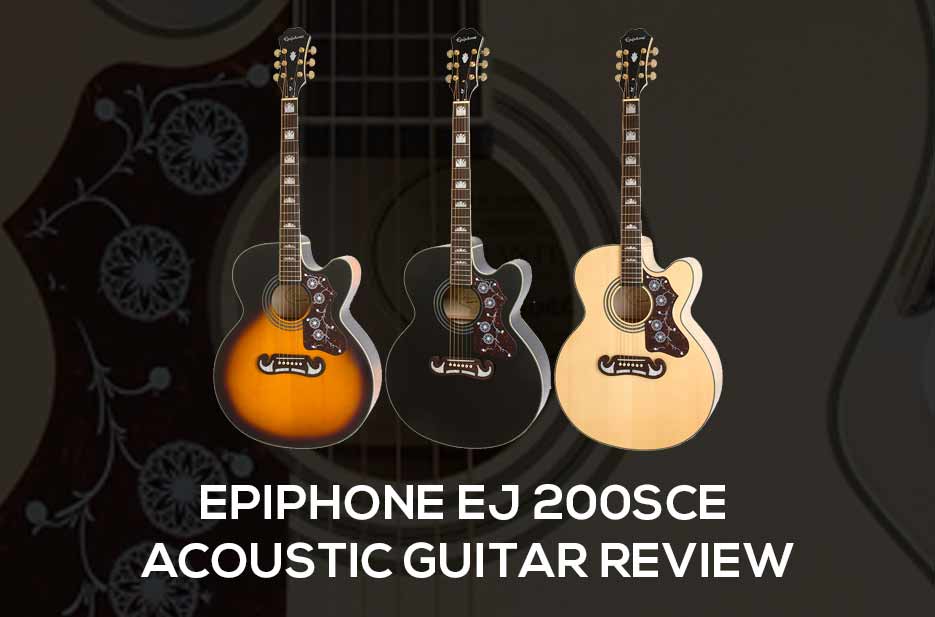 While they are easily most known for their world renown electric guitars, Gibson and its subsidiary brand Epiphone also manufactures acoustic (and acoustic-electric hybrid) guitar models that easily contend with those from any of the bigger names like Martin and Yamaha. Of note, the Epiphone 200SCE is an acoustic-electric hybrid model with gorgeous looks and killer sound. It hits a nice middle ground of affordable yet reasonably high quality, which is something of a benchmark for Epiphone in general.

Available with either a black, natural, or vintage sunburst finish, there are some interesting aesthetics at hand with the EJ 200SCE. First of all, the pick guard contains a quaint floral pattern that is truly one of a kind. The bridge also resembles a mustache. There really isn’t another guitar out there that looks quite like this, so you’re in luck if you like to stand out from the crowd. The look is completed by gold plated tuners and winding circular pinstripes that border the sound hole. The fret inlays are also in the shape of crowns, interestingly enough!

The shape, however, is fairly standard. Gibson and Epiphone have always made a lot of their acoustics with a body shape that mirrors their famous Les Paul electrics to an extent, and this is no exception. There’s a somewhat rounded off feel that makes the guitar immensely comfortable to play. There’s more than enough wood material used to also create some truly resonant sound. If you hold a chord on this guitar, it’s going to sustain loudly and proudly. 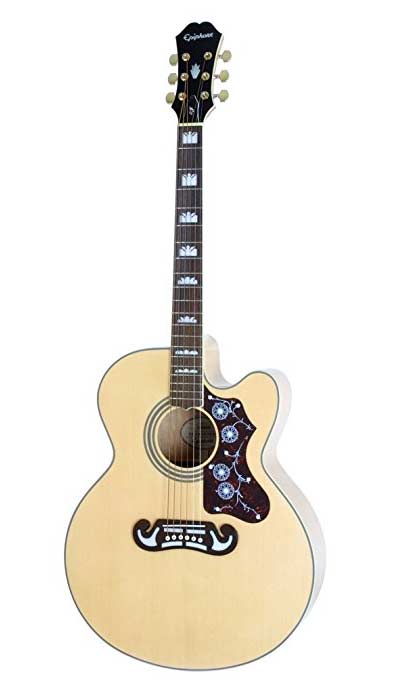 The materials used are quality through and through. There’s a solid spruce top, as is common, along with a maple back and neck, with rosewood comprising the fretboard and bridge. The cutaway gives sufficient access to the higher frets. There are 20 frets to work with, though you can easily extend the range even further with the use of a slide. Glass slides work particularly well for acoustics.

A common complaint about acoustic guitars is that they have limited playability in comparison to electric models. It’s quite an arduous task trying to pick up an acoustic and making anything resembling music come out of it once you’ve gotten used to just how easy electrics are to play. The team at Epiphone and Gibson seem to have tried their best to address that issue. The neck is attached to the body with a system known as Slim Taper. When combined with the comfy body shape and cutaway, the EJ 200SCE is undoubtedly easier to play than many acoustic models out there.

There’s a little more to this model than being a mere acoustic. While it excels in that regard, you can also plug this into an amp. You can use that as an easy way to fill the room more adequately for a fully clean, acoustic guitar-driven performance, but you can just as easily throw on some distortion or other effects if you want. This functionality is fueled by a new preamp system known as the eSonic2.

This preamp is every bit as high-tech as it sounds. It’s been designed to avoid any popping or crackling, a common issue with acoustic electric hybrids of old. It also has a tuner built right in, allowing you to quickly find the right pitch for your strings between songs. You can even mute the output while the tuner is in use, and you’ll be able to avoid the horrible noise that often comes with unplugging while still hooked into an active amp.

Beyond that, the preamp also allows for tone, blend, volume, and phase controls. Furthermore, you’ll only need fairly inexpensive watch batteries to power it. They’ll offer plenty of life in between each new installment, much more than the 9 volts often needed for preamps of this kind. The replacement process is also incredibly intuitive and easy to get behind you without much hassle.

The installed pickup is also low impedance, and it offers stereo sound. This is a major step up from the typical piezo pickups used in a lot of other acoustic-electrics. The sound you’ll get through an amp will have all of the qualities you’d want from an acoustic without any artificial nonsense thrown on top.