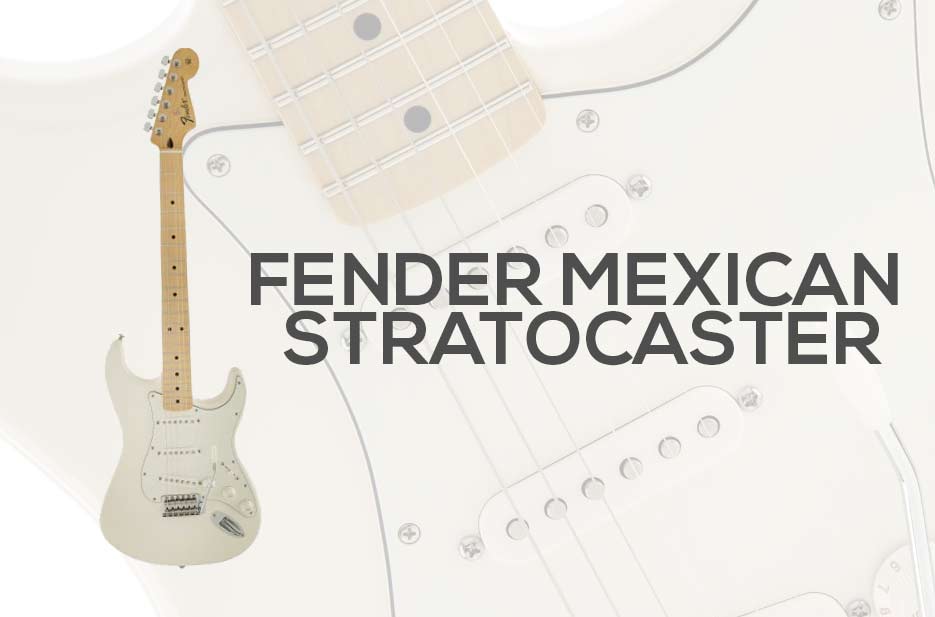 The Fender Stratocaster is one of the absolute staples of the electric guitar. It’s pretty much a toss up between that model and the Gibson Les Paul as the number one iconic guitar out there. Famous Fender strat players include Jimi Hendrix, Eric Clapton, David Gilmour, and literally too many others to list.

The body shape allows for fantastic melodic lead and solo based playing, with light weight and sharp looks to match. All of the “super strat” guitars from companies like Jackson and Ibanez that rules the 1980s would never have even existed without the Fender Stratocaster. This instrument is what you call a “game changer”, and it has proven to be a timeless classic.

The only real downside to the Fender strat is the price point. If you want the best of the best, something like an American elite with the Fender name proudly emblazoned across the headstock will easily set you back over $1,500.

Even the less glamorous deluxe models sit at around $800, and the American standard series that many players clamor for generally retails at around $1,000. That sort of pricing just isn’t realistic for the budgets of many, especially intermediate players that are really only just now getting off the ground with their musical careers. Enter: the Mexican Stratocaster.

MiM (made in Mexico)

Fender has taken to producing standard strats in Mexico with a slightly lower targeted price range than normal. To achieve the more wallet friendly retail value, slightly different materials are used, but the MiM (made in Mexico) strats are designed to reach the same performance and overall specs as any other guitar that comes down the main Fender assembly lines.

While this has sparked a lot of debate about the quality of the instruments, most reports indicate that players purchasing the Mexican made Stratocaster have been incredibly happy with the results.

When you consider all of the other expenses that come into play for electric guitar players, including strings, tuners, and other small accessories, amplifiers, effects pedals, stands, cases, and so on, you can rack up quite an expensive shopping cart full of goodies at your music store of choice.

With today’s economy being what it is, it makes sense that a lot of players are operating within a lower budget. Being able to purchase a standard Fender strat for only around $500 to $600 as opposed to double that or more is a value that just can’t be overlooked.

Of course, the cost is obviously more than appealing when it comes to the Mexican strats, but the big question is how do they stack up otherwise. In terms of pure specifications alone, they do stack up to American strats quite nicely. The features of Mexican Stratocaster include:

There are also several colors available. Stratocasters tend to look good in just about any color arrangement, and the options among the Mexican made versions include cherry red and tobacco sunbursts, white, silver, black, blue, brown, and so on.

With the differences in maple or rosewood necks and black or white scratch guards, you can easily find one of these instruments that will best suit your particular aesthetic tastes.

The biggest variance between the various Mexican models from a hardware or feature perspective lies within the pickup arrangements, the left or right-hand orientation, and the bridges. Some models include licensed Floyd Rose tremolo bridges that take the price up around an additional $100.

The name recognition there is very strong, adding to the overall value. The standard Fender bridges will still get the job done despite not giving you quite as much freedom wit your whammy tricks, however.

The fact that some models have rosewood fretboards whereas others have maple is also important to consider, but the fact that you can choose whichever feels best to you is nothing but a positive.

That brings the most important aspect of any guitar to the forefront: the performance. This is where some differences really do start to creep in. It may well be the fact that it’s known that there are some differences in the overall construction (i.e. lighter wood and less strict quality control), but Mexican Stratocasters don’t play or sound quite as good as the American varieties.

To compare them is obviously to stack a $600 guitar against one that might cost $400 or $500 more, however. There are obviously going to be some differences in quality there. The question ultimately becomes whether the drop off in playability makes the significantly lower price cease to be worth it.

Ultimately, no. Mexican Stratocasters are still fantastic instruments for their price. For a better comparison, stack them against guitars from the likes of Jackson, PRS, Schecter, or ESP in the same price range. These guitars are more than comparable, and they do have the classic looks and sound of a Stratocaster pretty much nailed.

This is still an officially endorsed Fender product, and that’s not a company that tends to just slap their name on anything. Overall, if you can only afford a standard Fender that was made in a Mexican factory, you’re still going to have a very high-quality instrument at your disposal.

In the end, the Fender Mexican Stratocaster represents an easy entry into what is one of the absolute evergreens in the world of electric guitars.