For beginners learning how to play the guitar, one of the first lessons should be guitar anatomy. Guitars are made up of a lot of different pieces, and knowing what these parts are called is important for talking to other people about playing and maintaining a guitar. Most guitar lessons will assume a basic level of knowledge about guitar parts as well, which means that a beginner trying to teach themselves guitar is going to have a difficult time getting through tutorials. Read on to learn all about the anatomy of a guitar, and how the different parts work.

We will start from the top of the guitar and work our way down. At the top of a guitar, there is a piece of wood with some pegs starting out called the headstock. The headstock holds the tuning pegs, which can be turned to change the pitch of the strings. Tuning pegs usually have screws attached that can be tightened and loosened to make it easier or harder to turn the pegs. If your guitar is sliding out of tune too often, you may need to tighten one or more of the tuning peg screws. 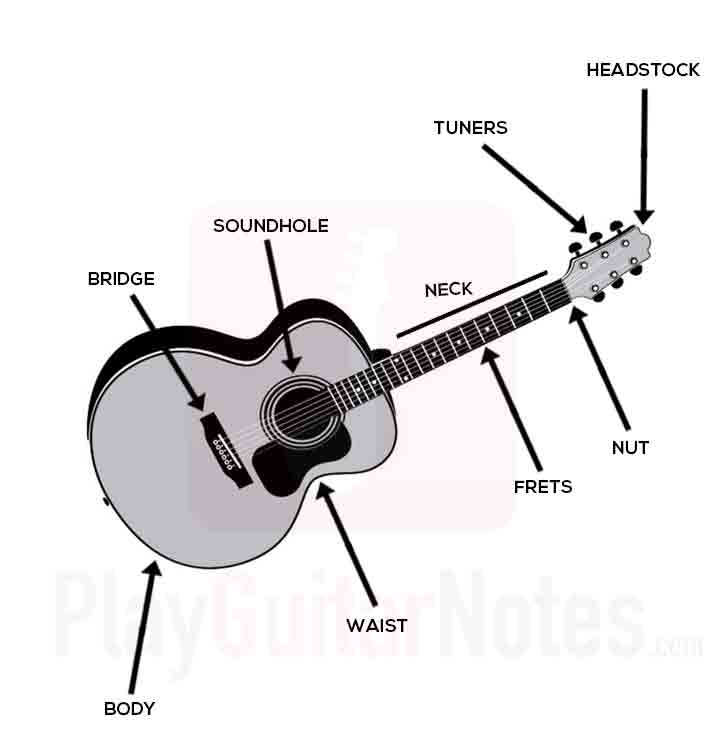 At the bottom of the headstock is the nut, which is the dividing point between the headstock and the neck. On the front of the neck, facing the strings is the fretboard, on which are individual metal lines called frets. By holding down a string in the space above a fret with your finger, you can play the note that corresponds to that fret. Many fretboards have dots or designs on the third, fifth, seventh, and ninth frets, and a double dot or design on the twelfth fret, to help easily tell where the frets are without having to count from the top. The twelfth fret is almost always marked because this is where the notes are exactly one octave up from the open strings.

Frets are numbered starting from the nut down to the end of the fretboard. The first fret is directly below the nut, then the second fret below that, and so on. The strings, meanwhile, are named for the note they play when open. When facing the guitar with the headstock up, the strings from left to right are low E, A, D, G, B, and high E. Memorizing the string names and the fretboard numbering system is very important, because most guitar tutorials will refer to a given string at a given fret. For example, you may be instructed to play the A string on the third fret to play the note C.

The body of the guitar is a little different depending on what kind of guitar it is. Electric guitars have different parts than acoustic guitars. In acoustic guitars, the fretboard will end at the sound hole, which amplifies the sound of the strings. Usually, you should pluck the strings directly over the sound hole, but playing the fretboard produces a softer, mellower sound while playing below the sound hole produces a harsher, more metallic sound, both of which might be desired for certain types of songs. The strings stretch over the sound hole and end at the bridge, where the are held in with pins called bridge pins. In a nylon string guitar, there are no pins, and the strings will instead be tied to the bridge.

In an electric guitar, the body looks a bit different. There is no sound hole in an electric guitar because amplification is done externally instead. Where the sound hole would be, there are three sets of pickups, which convey the sound to an amplifier. Usually, to the right of the strings, there is a pickup selector, as well as control knobs, which allow sound customization. There is also an output jack below the bridge, which similar to an acoustic guitar is where the guitar strings are anchored. The output jack is where the plug goes to connect the guitar to the amplifier. 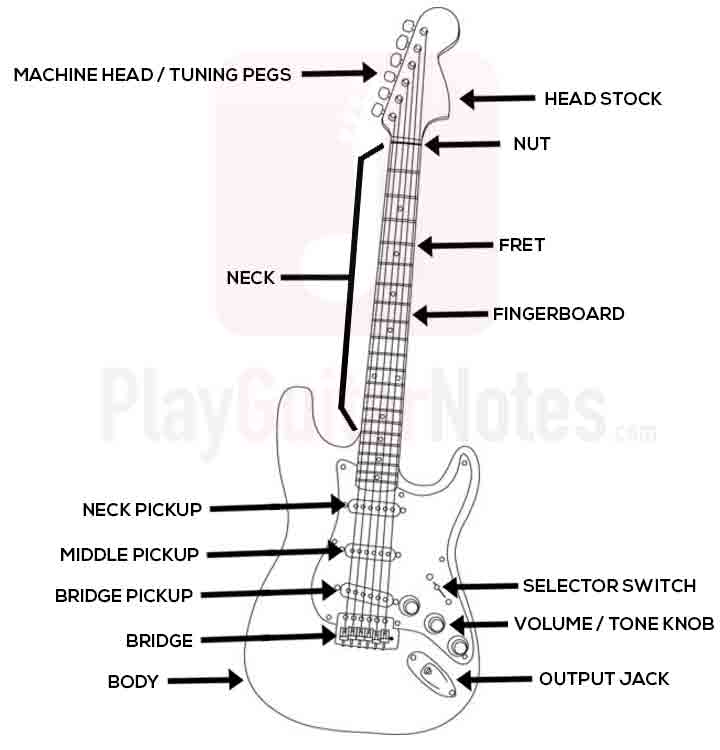 Guitar anatomy is one of the first things to learn when starting out on guitar. Knowing what the parts are called will help you to understand tutorials and instructions about the instrument, and especially knowing the string names and fret numbers is essential for learning any song. It may seem intimidating at first, but going over it once a day for a week or so should help you memorize this information easily.