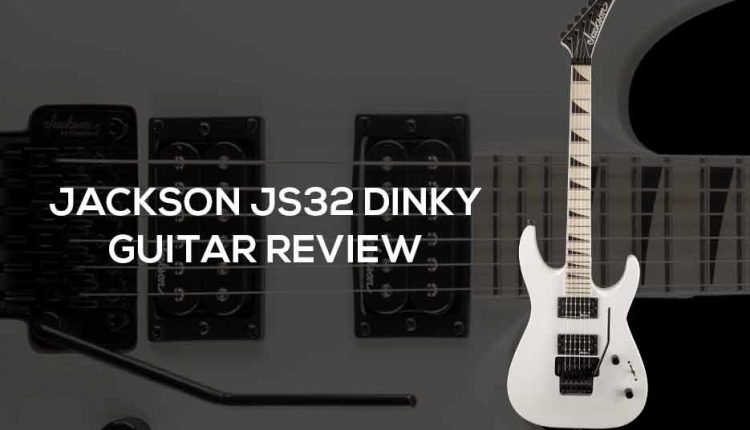 What do you get when you cross affordability with quality parts, fast action, and killer sound? The answer is none other than the Jackson JS32 dinky electric guitar. This is an instrument that’s built to give you as much bang for your buck possible. It’s all about high performance and low cost.

They use the minimum amount of cost saving measures in the manufacturing process to deliver a fantastic product that performs well without the need of a high price tag. It’s really quite impressive what the designers of this model have managed to pull off.

There are several varieties of guitar that carry the JS32 designation. The first is the Arch Top model, named for its literal arch topped mahogany and basswood combination body. The second is the DKA-M with slightly different materials, and there are also 7 string and 8 string models.

For simplicity’s sake, this review will tackle the standard 6 string varieties. You can expect the exact same from the extended range models, just with additional strings added to the bottom end. The overall design is fairly even among each of the four, ultimately leaving the choice up to mere personal taste.

The Arch Top JS32 is available in three colors: satin black, oiled natural, and bright blue. Choosing from the DKA-M variety opens the options up a bit further with glossy black and snow white. The Arch Top has a rosewood fretboard with pearl sharkfin inlays, whereas the DKA-M’s neck is made of maple with black sharkfin inlays. There are other minor disparities at hand, but these core aesthetics make up the bulk of the differences between the two different styles. No matter your preference in the look of the guitar, the basic specs and features are all right on par with one another.

Jackson is one of the leading brands for a guitarist that love to play fast and aggressively with the utmost precision. One of their most notable claims to fame was in being the brand of choice for the late Ozzy Osbourne guitarist Randy Rhodes, who was undoubtedly next in line after Eddie Van Halen as one of the most influential figures for all guitarists moving forward. A number of big name acts include Jackson models in their repertoire, even if they aren’t endorsed specifically. Their products are always of indisputable quality, and the JS32 Dinky falls right in line with that.

This model also shows off the company’s dedication to continuing to push the boundary. They could sell the same old models with the same exact composition of parts and continue to stay perfectly afloat, but instead, they are always developing new refinements to make the instruments even better than they were before. For instance, the JS32 features ceramic magnet pickups that allow for greater output. The necks are also reinforced with graphite, and there’s binding to give even more resilience to the headstocks and necks. The arch top itself is also a newer feature that adds just a bit more “oomph” to the overall package.

The bridge is a Jackson licensed Floyd Rose, a manufacturer which has long been associated with some of the craziest tremolo bar tricks around. The bulk of the savings on the production side comes from the pickups, which are Jackson’s own variety rather than something like EMGs or Duncans. Even so, the guitar sounds good right out of the box. As soon as you plug in and hit your first power chord, it’s all going to fall into place in relatively short order. The sounds you can get from this model are truly gigantic, and the effortless fretwork can easily leave you wanting to play for hours.

The Jackson JS32 with drop dead gorgeous looks that will easily wow all of your fellow musician friends – maybe even that crush you happen to have – and the lightning fast action we’ve all come to expect from Jackson, this is the type of guitar that you’ll fall in love with instantly. It draws you in and doesn’t let go, and the feeling is definitely going to be mutual.