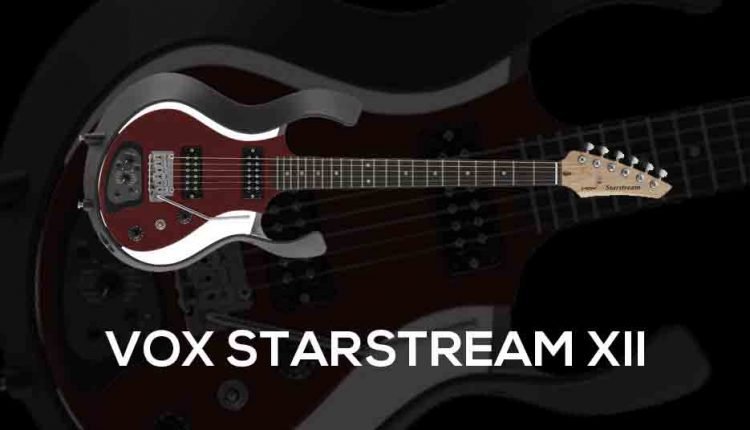 While perhaps most widely known for manufacturing amplifiers and guitar effects pedals such as the wah, Vox actually produces guitars as well. Of note, their Starstream series has a notable legacy that goes back several decades. While currently wowing players left and right with the sleek and modern Starscream Type 1, the most classic example from the lineup is undoubtedly the Starstream XII from 1968.

The Starstream XII is a hollow bodied electric guitar that has several effects built in, making it much more than just a standard instrument. It even has 12 strings rather than the standard 6, giving an even fuller and brighter overall sound. While certainly a bit more of a chore to string up and tune, there’s no denying the ethereal beauty that chords played on a 12 string carry.

Adding even further to the unique qualities of the guitar, the body shape is a unique teardrop. It’s almost as if you were to round off and shorten a flying V while also filling in the gap at the bottom. You pretty much have to play this sort of body shape with a strap for it to be comfortable, but the weight distribution makes it work fairly well, and the lack of obstruction towards the higher frets makes playing even easier than with most electric guitars.

Are topped off by a red sunburst finish, as was common among many models produced in that era. The hardware and other features produce a nice array of additional highlight colors, producing a highly detailed look that speaks volumes about what this guitar is all about. It’s both immensely retro while also interestingly forward thinking. You just don’t see guitars like this very often these days, making it a real showpiece for any collection.

Some of the aforementioned extra features include a tuning guide that’s completely built in, a boost for the treble and gain, a distortion boost, wah meant to be controlled with your palm alone, and a repeat feature. If you’re the type that hates a bunch of cables being patched into a whole array of effects but you do like the options, this sort of guitar must be an absolute dream come true. Many would argue that “all in one” solutions often equate to a “master of none” effect, but the ambition is appreciated. This very well could have been a game changer that defined all guitars moving forward. Allowing you to do so much with just a single instrument is an impressively bold move. If there’s one thing that’s true, Vox has been pushing the envelope for a long time now!

The rest of the features of the Starstream XII are filled out with an adjustable steel rod, Vox brand Ferro-Sonic pickups, chrome plated tuners, an adjustable bridge, and a Vox manufactured double T-Bar. Purchases also included a hardshell case. All of the effects only required a single 9-volt battery to work, and you could easily change it out near the bottom of the body.

It may take a while to come across one of these guitars in person, but if you hang out at any shops with a “used” section you just might get lucky. All kinds of interesting models make their way through Guitar Center, for example. You can also check for promising deals on eBay. Finally, be sure to join as many different guitar communities online as you can. Not only will you potentially catch interesting opportunities to purchase unique models like this one, you’ll likely make a whole lot of new friends and expand the potential of your playing in the process.