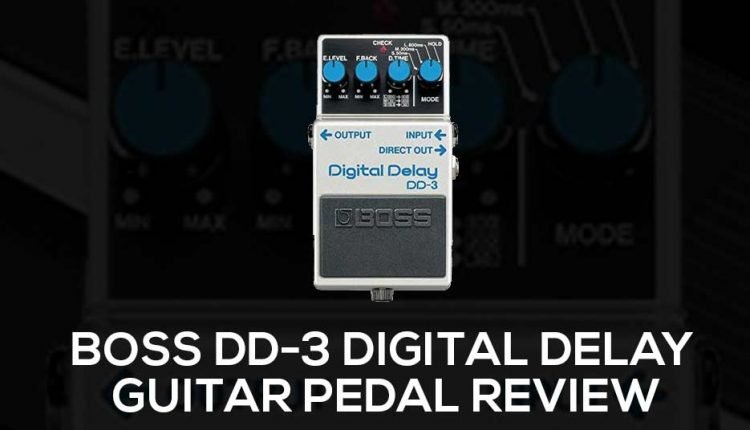 The Boss DD-3 Digital Delay guitar effects pedal is a classic that has fueled the delay filled exploits of many a player in its time. While there is a myriad of other delay pedals on the market, many of which are combined with a host of other effects and various features, the sound of this Boss model is something truly unique in and of itself. You can easily adjust its many settings on the fly, and with a simple sweep of one of its knobs open up your playing to all kinds of interesting twists and turns.

The standard Boss design is in full effect with the DD-3. It’s the same size as most of the rest of their models, and its general aesthetic is something in line with retro-futurism.

It’s a very attractive pedal that also happens to be built to last, with a combination of sturdy metals, rubber, and plastic. The display indicating what each knob controls will also hold up well even after tons of abuse through the years. Despite the reasonably affordable price point, this model is a serious workhorse that will never let you down. 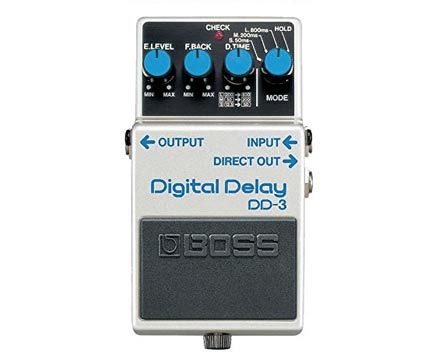 The features of the pedal are its real strong suit of course. You can alter the level and feedback of your delay, as well as the delay time and delay mode. In essence, you’ll be able to set the pedal to repeat what you’re playing in a number of various intervals, some of which might happen immediately after you strike the note for a shimmering sound, others which occur notably after, allowing you to build some very interesting melodies that would be difficult to replicate if played note for note alone. Just check out Buckethead’s Big Sur Moon for an extreme example of the kind of intense patterns you can muster with the power of the DD-3 at your disposal.

Is perhaps one of the best out of the entire pedal. With this engaged, you’ll be able to repeat certain passages you’ve played indefinitely. If you only play alone, you’ll be able to add whole new dimensions to each of your practice sessions with this pedal, and you can even make yourself sound like more than one guitarist, one complimenting the other in ever-changing ways. This sort of product is the experimental musician’s dream.