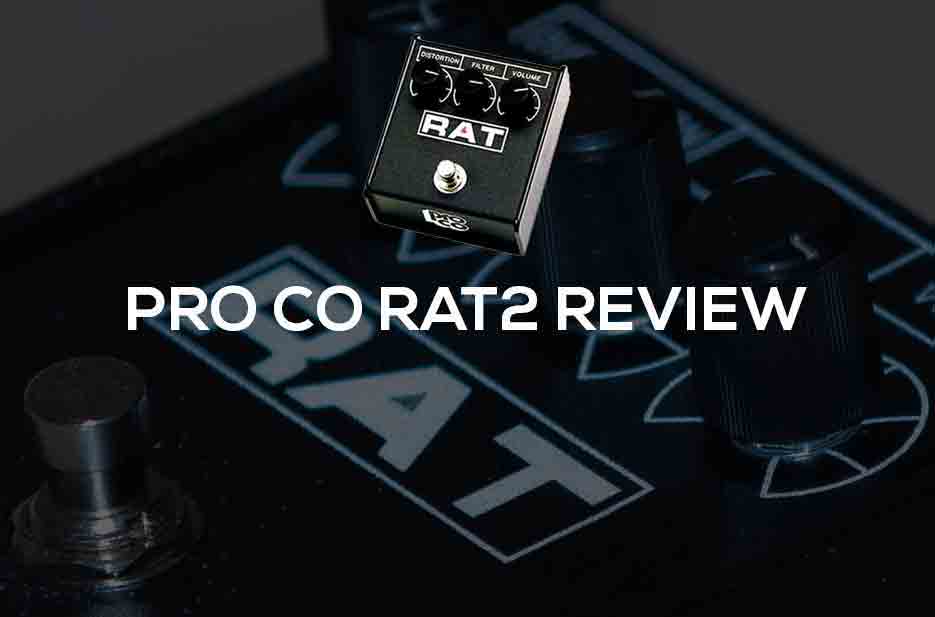 The Pro Co RAT2 is a guitar distortion pedal that’s no nonsense across the board. It’s simple in looks and functionality. It does one or two things exceptionally well without the need of throwing in a bunch of additional bells and whistles. With more and more pedals offering as many different options as possible now, it takes serious confidence for Pro Co to put their foot down and dedicate this unit to a singular purpose. With this pedal powering your guitar, you’ll have all you need to boost even the most pummeling of riffs into the next level.

The RAT2 is almost purely utilitarian in design. It’s true to the “Stompbox” name with a squarish build. The stark aesthetics don’t stand out in particular, but that’s hardly the point. This is all about what you’re getting from the output rather than how it looks sitting on your pedal board!

Put in use, you’ll soon see the beauty of this simplistic design principle. You can click the RAT2 on and off via a button near the bottom of the unit, and three dials allow you to tune the style of the distortion to your liking. The three options are as follows:

• Distortion – Controls the intensity of the distortion itself.
• Filter – Actis as an EQ of sorts to alter the tone.
• Volume – Boosts the signal to push you even higher into the mix during performances. 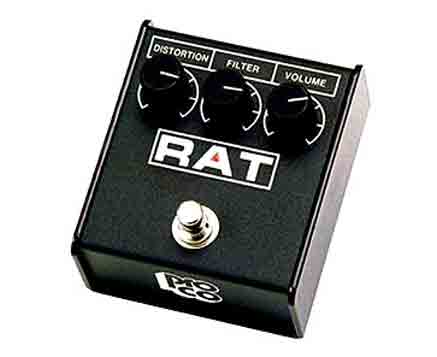 Are very responsive and sturdy, easily staying exactly where you turn them. Once you find your sweet spot, you’ll be perfectly locked in. There really is a lot of variety from one end of each dial to the next, unlike many other pedals on the market, and you can find great variations in between.

That relates to another great strength of the pedal. Though simplistic in its overall design, you can apply it to a lot of different play styles. If you’re just a straight-up hard rock player with tons of ACDC and Led Zeppelin in your heart, you’ll be able to dial in those exact kind of tones here. If you like the more extreme end of things like the high gain, mid scooped sounds of Metallica or Pantera, you’ll also be more than covered. All of the Meshuggah and djent fans out there throwing around riffs on 7 and 8 string guitars will also be perfectly served here.

Of course, you can use the Pro Co RAT2 pedal as your primary distortion sound. Hooked directly to your amp of choice and guitar, it will give you a solid means of switching between your preferred clean sound and a distorted variation powered by the pedal. When switching channels via other means, you’ll often run into problems where the distorted channel actually gives you a loss of clarity and even lower volume thanks to the compression. When using the RAT2 to simply boost the sound you’re already getting from the amp, you won’t have any of those problems to worry about.

If you do already have a distortion sound you love from your amp, you can easily use the RAT2 similarly to a tube screamer. This pedal makes for a perfect boost during key moments of a performance. Let’s say you’re playing a riff that has no accompaniment at the moment or a solo, a further boost in volume and power will send it over the edge and add a bit more dynamics to the performance overall. You can easily accomplish that with this puppy at your disposal.